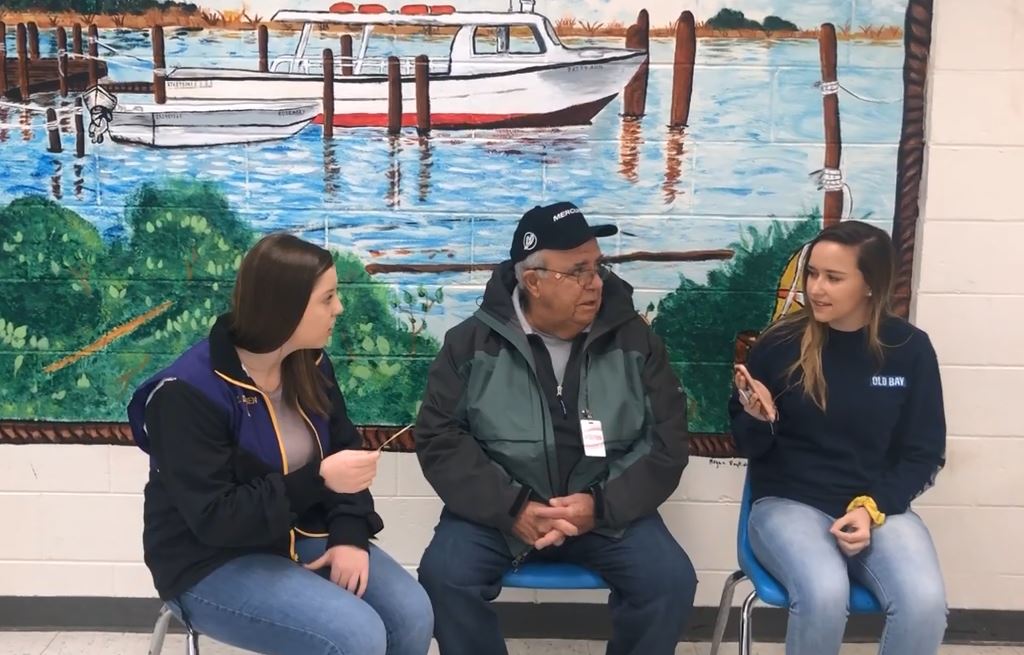 Students highlight Captain Sam Turner's life as an African American skipjack and business owner on Maryland's Eastern Shore during the Civil Rights era. They also interview contemporary waterman Steve Sterling about how life on the water has changed. This story was produced by Crisfield High School students Brooke, Molly, Austin and Collin for Stories: YES in collaboration with Crisfield Heritage Foundation.

Speaker 1: Watermen Community has had a big influence on Crisfield due to its history, dependability and connection to the Chesapeake Bay. While it is well known that many white men work on the water, it is important to acknowledge that many African Americans work behind the scenes to get the job done. Whether it's moving crabs, cleaning them or packaging them, Captain Sam Turner was a Waterman on the Eastern shore. He was an African American seafood business owner who processed and packaged oysters and crabs. This was different for the community because many mainstream Watermen were white.

Speaker 1: Unfortunately, the business flooded in Hurricane Agnes, leaving damages and debt. And a quote from Sam Turner was, "There wasn't no friction down here amongst the Watermen. There ain't no color line out there in that river." It is important to realize that is coming from an African American, especially since he acknowledged that as a job on both ends of the spectrum. And that's why captain Sam Turner will leave a mark on Eastern shore history.

Speaker 2: How long have you been on the water?

Speaker 2: Wow. Okay. How often do you go fishing and crabbing and do water-

Speaker 1: Every day or how often?

Steve Sterling: Yeah. Well, and that's governed by what the catch is. If you can't make any money at it, if it comes a lull, you stay home. But other than that, do it every day, six days a week.

Speaker 2: And how diverse is the community of the Watermen? Between black and white?

Speaker 1:: Are there any that pick the crabs or package them?

Steve Sterling: Crisfield has one distinction, though. We had the very first black skipjack owner in the state.

Speaker 2: How has the Watermen community changed from then to now?

Steve Sterling: From then? Define then. How far back?

Speaker 1: As far back as you can remember to now, how has it changed?

Steve Sterling: Well, when I started in my own boat in '70, we had 17 picking houses and now we have one.

Steve Sterling: The number of Watermen has reduced drastically. The reason being it's just so expensive to get started now. It costs so much to get involved in it.

Steve Sterling: That would probably be the main reason, is the expense.

Speaker 1: Yeah. Is there primarily the same people that still go out and go out on the boat that it was when you were growing up? Do they still do it now or have they changed their careers?

Steve Sterling: Well, it's sad to say, most of them that were doing it when I started are either retired or dead.

Steve Sterling: I have been in there probably the longest of anybody that's there now.

Speaker 1: Yeah. So you're basically one of the only ones left that still go out every day?

Steve Sterling: No. No, there's probably 25 plus boats, but I'm pretty much the oldest.

Speaker 2: What is the biggest difference between then and now?

Steve Sterling: Technology. Mainly electronics, the gear on the boats. The gear that we use in the water has not changed all that much, but the electronics, the hydraulics, the mechanics, everything, just everything on those boats is pretty much gone 180.

Speaker 2: And do the... James Marshall is a local favorite of Crisfield. Between his day job as a school research officer at Crisfield High, he has done it all. He has been on the water for all of his life, including joining the Marines to serve our country. He said the biggest change from now as then is their loss of sense of pride. They don't do it to say, "I'm a proud Waterman in Crisfield" anymore. He definitely knows what he's talking about and seen the community change from beginning to now. They all get along he says during the interview. We thank Captain James Marshall for its hard work and dedication to the community as a whole. We also thank Steve Turner for his time and we hope you enjoy our documentary.