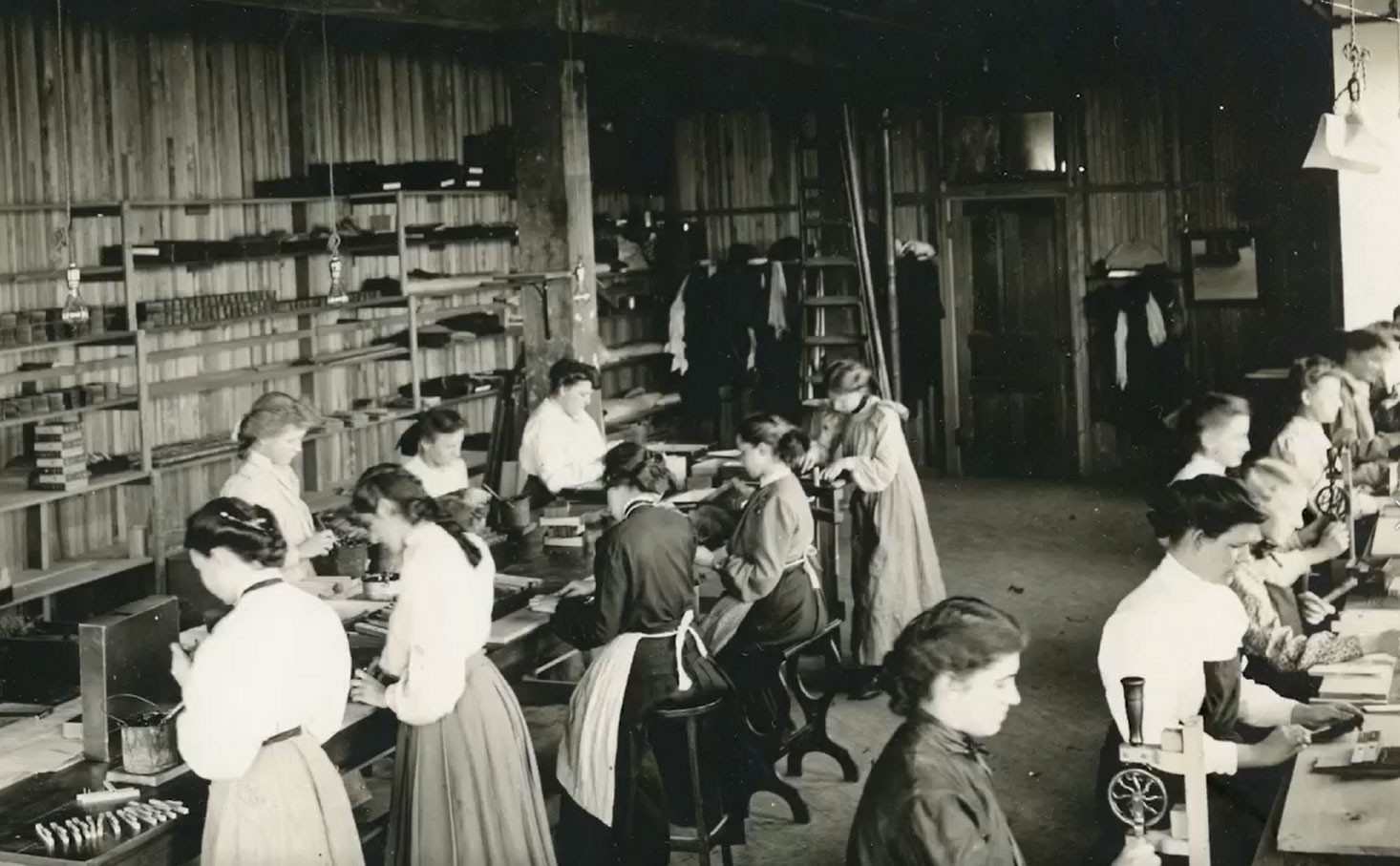 DeKalb County History Center and several partners in DeKalb County, Illinois, collected 100 objects about the country that will be displayed in an exhibition titled “History of DeKalb County in 100 Objects,” opening on June 11, 2022. Inspired by this exhibition and as a part of Museum on Main Street’s Coming Home project, area students created a project inspired by one of the 100 selected objects. Each student completed deep research on the topic, interviewed local residents, and edited and produced a video. Topics include: the North Grove One Room School, the Olympic Torch, the Navy’s TDR – 1, and the Sycamore Pumpkin Fest. In this short film, Jeff Kinner interviews aviation enthusiast Roger Keys.

Roger Keys (00:11): My name is Roger Keys, and that's K-E-Y-S, just like car keys. It's too simple. It's always misspelled. But I'm actually a general contractor. I specialize in historic restoration and I've been doing that since about 1973. I do a lot of work in the city, but I do work out here too.

Roger Keys (00:35): About 35 years ago, my kids were real little and on a Sunday, my wife and I, with the kids, were driving around on a Sunday and we're in water man. And all of a sudden she sees a sign for a garage sale and sure enough, this was on a table at a garage sale. And I picked it up. See that this is solid wood, it's very well constructed. And the markings are very authentic. Had no idea what it was. And so I paid five dollars for it, which was pretty cheap, but I kept thinking, "well, this is something significant".

Roger Keys (01:10): And it turns out it really was, but it took me eight years to actually identify this thing. I had this for eight years and I would take it to events where maybe plane enthusiasts were an experimental aircraft association would have fly-ins on farms around here. And then about eight years later, I took it to one of those and a guy came up and he said, "that's an interstate TDR. Where did you find that"? So once I had a name, then I was able to actually start doing my research on this. Now 35 years ago, we didn't have the internet, obviously. I'd write to the Naval archives or the national archives. And about six weeks later, I might get a really, really ghost-y looking photocopy of stuff. And I started talking to people. The one that told me what it was actually worked on it out of high school in 1944.

Roger Keys (02:00): He was out of high school, and before he went into the service, he worked at the [inaudible 00:02:05] plant on this airplane. So he knew what it was, but he had no idea. He said, "well, it never went anywhere. It was all experimental and it was never went anywhere". So I just figured it was just something interesting they did during world war II in DeKalb and [inaudible 00:02:21] was involved in, which was a cool story. But as I started getting stuff back from the Naval archives, I found out it not only was used in the south Pacific, but I actually found the air group.

Roger Keys (02:31): The Navy air group was having reunions that actually operated this in the south Pacific. So all of a sudden, I'm putting the story of the people that built the airplane in DeKalb together with the guys that flew in the war in the south Pacific. And neither side knew anything about the guys that flew and had no idea where it came from, because it was top secret where it was built and all this stuff. The people that built it had no idea that it actually went into the war.

Roger Keys (03:04): Interstate aircraft was well known for great engineering, tooling, and production methods to build things quickly. But the Naval aircraft factory in the east coast and all of their people were designing this. They needed refined for manufacturing expedience so they could build it quickly. They wanted to do a lot of this kind of stuff in the middle of the country, because they didn't know if the Germans were going to attack New York or if the Japanese were going to come over on the Pacific side. So they figured it's a big country, do stuff in the middle, but it is all made of wood because it was experimental. It was top secret, but being experimental, they couldn't utilize war central materials like aluminum, is a big one. So most of the plane is wood with a metal tube frame that held the engines in the body of the plane and all the wings and everything and coatings was all wood.

Roger Keys (04:05): Even around the wind, around the engines was all wood. And what is kind of cool about that, they needed a steel tube airframe and [inaudible 00:04:16] didn't do steel, they did wood. They made pianos and things, and they were very good at fabricating odd shapes and stuff. They literally had Schwinn Bicycle in Chicago build the airframe for this right at Peace Road and Pleasant Street. There was the old general electric factory. A lot of you may remember that. It's empty now. So Interstate Aircraft took over that building to assemble the parts that [inaudible 00:04:44] made. They were right next door to where Interstate had set up the assembly area and then [inaudible 00:04:54] totally ceased making musical instruments in 1940, almost just before 1943. And within six months, they were producing a 50 foot wingspan twin engine aircraft.

Roger Keys (05:06): You can see the south end of the building has a big aircraft hanger door on it still today. They built the plane inside this huge assembly area and the Navy built an airport to test the plane out and that became the DeKalb airport. So everything came together in DeKalb. [inaudible 00:05:23] made all the parts in their factory. The wooden parts, the shipment from Schwinn came over by rail from Chicago. And then everything was assembled just to the east of the [inaudible 00:05:35] plant where there was a newer building in 1940. It was built as an Arlington furniture. So they would actually build a plane in there, get it totally operational, and then roll it out the aircraft hanger door at the south end of the plant out on the Navy's field, then the Navy would come and fly them around and then make sure they were acceptable.

Roger Keys (05:56): And once they were accepted, they would land them and then [inaudible 00:06:00] and Interstate immediately took them apart and put them in crates. There could have been eight or nine crates. They're big wings and all these parts. And they were shipped by rail to San Diego and from San Diego, they went on Navy ships, smaller aircraft carriers in freighter ships that the Navy operated over to the south Pacific. And then when it went overseas, the Navy personnel had their own base. It's called [inaudible 00:06:23] Island in south Pacific and they would uncrate everything. I went to reunions, the guys that operated in the south Pacific and they said that six guys could put the thing together in less than four hours.

Roger Keys (06:40): So they started working with Naval aircraft factory, developing all these ideas for a remotely controlled aircraft. Once they had a truck on the ground at [inaudible 00:06:50] Island, they could actually control the takeoff and then a TBM Avenger would be overhead, and it would assume control when it was in flight. And a guy in the basement of a TBM Avenger would be controlling the radio control gear. They had developed radio control systems in the early thirties. They worked with RCA who had just developed the television system in 1934 at the world's fair 33. So they use a rotary telephone dial. And with the rotary telephone dials, a series of digits, you can get an awful lot of combinations and that's how they did the radio control to make it bank right or left, or to send that kind of stuff. And then of course the television transmitter in the nose of the plane actually sent an image to the TBM Avenger and the guy would be sitting there with a small screen and watching wherever the camera was pointed, they would actually fly it to it.

Roger Keys (07:49): If they saw an island, they could head for that island, look for a target. But you may notice that this plane has a canopy on it. And everybody said, "well, it's remotely controlled. Why is there a canopy on it"? Well, the reason is that if it's in the middle of the Pacific and they need to guide this thing with a television system and radio control over 400 miles, they could. Anything, radio interference. It probably wouldn't make it. So he would fly it to a Marine base near Bougainville from [inaudible 00:08:25] and the pilot would get out and they would put the bomb underneath it, make sure everything was set and then they could fly it off.

Roger Keys (08:36): So I interviewed a guy named Jack Barrell, and he was actually an RCA engineer back in 1936. And he worked with the team that developed the first television system that went into the nose of this airplane. He pulled his thing out of his bag, had an Emmy. It's a real Emmy. He put it on his table, and I say, "is that what I think it is"? He says, "yeah". I was happy. Emmy in 1944 was top secret. And the rule was, you could not talk about it for 30 years. There was 1974. 19 64, he took the technology that he put in that airplane noses. And he put it on a golf cart and he rolled it along the sidelines of a football game. And he won an Emmy for the technical aspect of doing that.

Roger Keys (09:26): There was about 199 of this version here. This is the one interstate TDR. About 49 of them were actually deployed against the Japanese in September and October of 1944. I think 29 of them actually were direct hits on their targets. All the ones that were shipped overseas, if they weren't expended against Japanese live targets when the war ended, they were just taken out on barges and dumped in the ocean. There's actually one and a half surviving Interstate TDRs down in Pensacola, Florida. It's Naval air museum out there. And then here in DeKalb, we have some pretty good parts. We have a few slash wing parts and engine landing ear canopies, things like that. We have displayed out at our airport. So I almost own a war bird. I have pretty good size parts of a war bird. And it's all on display out at the airport.