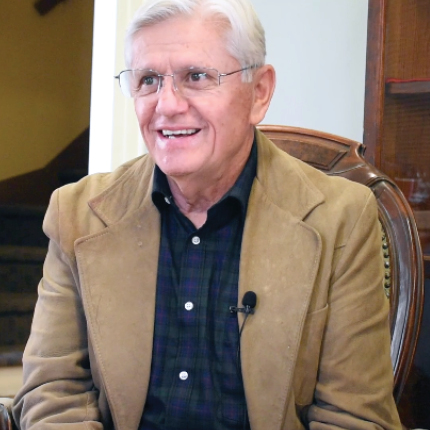 In early 2020 (just weeks before the pandemic), Smithsonian staff and their storytelling partners at the Peale, Baltimore, traveled to multiple states in the U.S. to ask residents of those states about voting experiences, the current state of American democracy, what issues brought them to the polls, how they made a difference in their communities, and what Americans' civic responsibilities were, among other complex questions.

Rodo Sofrananc (00:01): Actually, I was born in what is now Montenegro. It was called Yugoslavia when I was born. My dad was an officer in the King's Army, spent a lot of years as a prisoner of war in World War II and when returned to Yugoslavia, Montenegro, he would not swear allegiance away from the democratic monarchy to communism of Tito. They had a choice of either accepting that or trying to find another home, so they chose to try to find another home.

(00:35): We ended up in Austria, thinking we'd go to Germany, but not unlike now, overwhelmed with a lot of refugees. We were in a refugee camp for a couple years and then were sponsored by a group in Cleveland, Ohio, and we came to the United States because that's where the wind blew us. My background was here introduced to a new language, a new culture, land of opportunity, and let's take advantage of those opportunities.

(01:11): It was talked about a lot. My mom was German, so she left also a little village and grew up under the Third Reich. As a young teenager, knowing very little what was going on and just baffled on what was going on, she worked for a Jewish doctor in Berlin and all of a sudden one day got papers, and I have those papers at home with the swastika on there, that said as of this day, you will no longer be working for him.

(01:48): She said a wonderful family she lived with and everything, could not understand what they were doing and why it was going on. She had that background. My dad had another form of totalitarianism. They both were very, very much in participate, participate. If you let the extremes on either end take over, you're in trouble.

(02:10): He said, "We need a large middle ground, people talking to each other, understanding each other, and especially participating in the process." Both of them harp that a lot, and they didn't require it. My sister and I both believed in that right away and said, "Here's an opportunity," and we have been taking advantage of it since then.