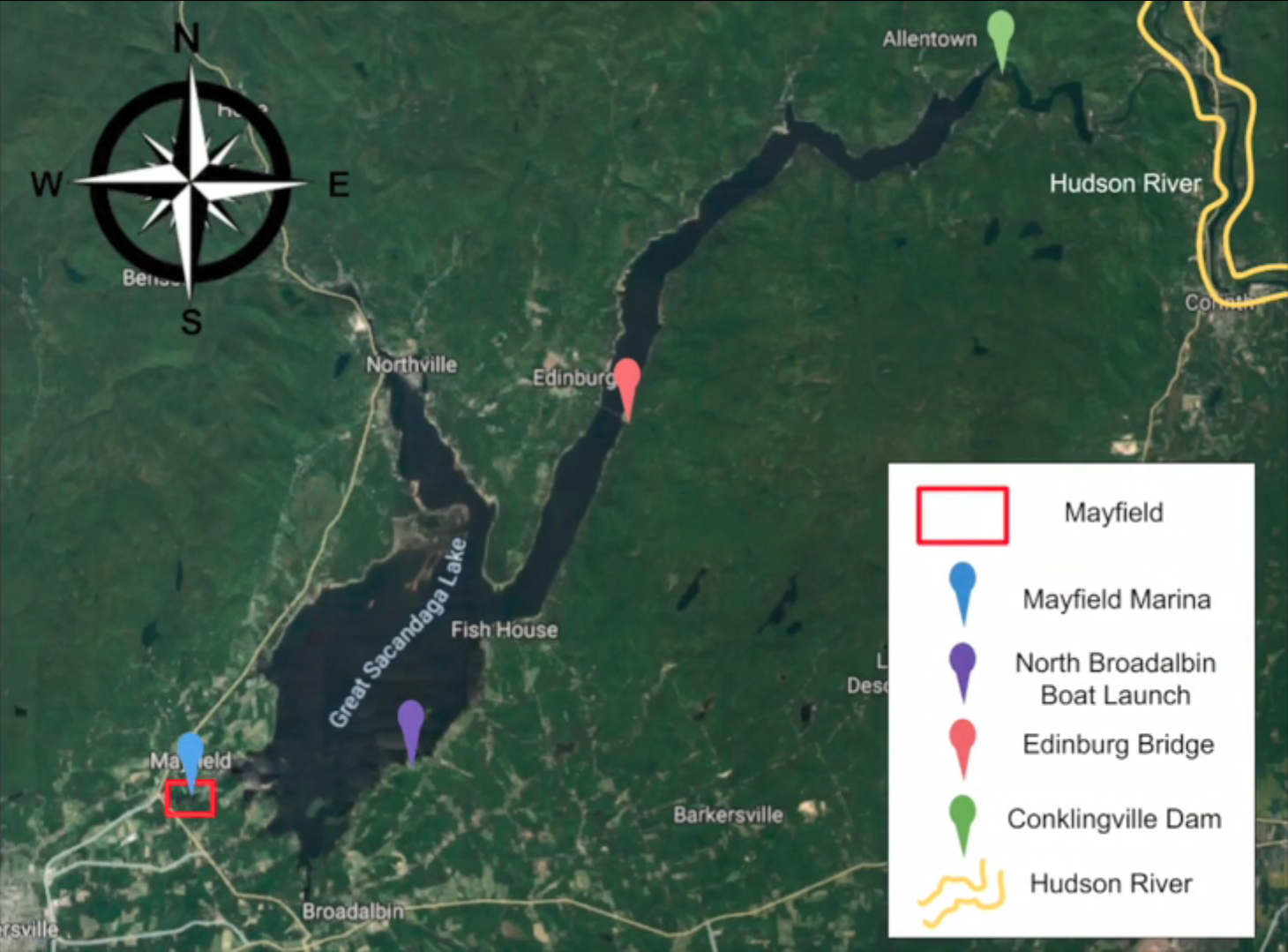 Coleco Industries in Mayfield, NY, famous for toys like Cabbage Patch Kids, went bankrupt in 1988 but its plastic legacy lives on through the environmental effects that can still be found throughout the region's waterways. The Amsterdam Environmental Study Team, Katherine Hemsley, Frank Staley, Andrew Francisco, and Corey Cherizard, from the Schoharie River Center trace the impacts through interviews with residents and by taking samples from several sites using Raman spectroscopy with the help of Union College's Department of Geology. Watch what the Team discovers in this remarkable and devastating story that has implications for New York state and beyond. This is a Stories: YES project which was supported by Schoharie River Center and New York Folklore Society.

Find the video recording at the bottom of this page.

Speaker 1: So, I'm out at Mayfield Lake. And, just showing the shore line here. So if you come up to the shore line, everything is starting to recede. And you can see. You can see all these little pellets.

Speaker 3: [:40] Coleco was a toy company that exploded in popularity in the early 1980s, before quickly falling off due to bankruptcy in the late 1980s. In the early 1950s, before it was a huge name brand, Coleco opened a plant in the small town of Mayfield, New York. Which at first produced themed Moccasin kits, but then in 1956 the company began experimenting with plastics to produce new toys such as miniature golf sets, and would later expand to producing wading pools, toy army helmets, sleds, and video games.

Speaker 4: [1:13] There was a Coleco plane up there and they would bring in these plastic beads and blow them into Coleco's you know, silos or whatever they had to store them in. And then they made toys and games and all that other stuff. And that's when they would use their plastic in them all. But when they did that, they were all over the streets up there. And when it rained, they'd wash down and they'd wash into the street drainage system. What goes in the streets, goes in the Mayfield lake. There are literally billions of them. It's very common now, that's been doing that for since probably back in the 60s.

Speaker 3: [1:55] The Mayfield town historian provided copies of village records that we analyzed for any mentions of Coleco's presence or of plastic in Mayfield's lake in the past. The examination of village meeting records provided information indicating that the public had raised concerns about the presence of plastic in Mayfield Lake, dating back to 1973. This knowledge was collected from the Village of Mayfield's meeting notes from a meeting between Coleco and the village board on June 10th, 1974. During the meeting, there were 8 points of discussion brought up. One of which stated, "There are some plastic pellets in Mayfield Lake, but the problem is much improved over 1973."

Speaker 3: [2:33] The plastic pellets are again referred to in minutes from a village board meeting, on April 10th, 1977. Where a resident who lived on the lake, "brought in a sample of plastic pellets collected from the shoreline which had found its way from the Coleco plant into the lake." According to the town's meeting minutes, on May 2nd, 1977. The Coleco plant acknowledging the issue, promised to clean up "any concentration of pellets around the Lake." This was a promise that was never delivered upon as in 1989, Coleco sold all of its assets to Hasbro. Closing its stores in Mayfield and leaving behind seemly endless amounts of pollution that would maintain its presences on the land in which it was left for many years to come.

Speaker 5: [3:17] We use the definition of microplastics as particles that are 5 millometers or less, in size. So that's about 1/5 of an inch or a little less than a quarter of an inch, something like that.

Speaker 3: [3:32] We had a total of 4 test sights. Sample Site one, the Pump House Park was a public parka bout 1 mile downhill from the Coleco plant. Sample Site two, the private residence, was a location of the Mayfield citizens that originally notified us regarding the plastic. Sample Site 3 was the Coleco Yard, and Sample Site 4 was from where Coleco's silos stored its pre production plastic.

Speaker 6: [3:57] In order to determine if the plastic we were finding was truly from Coleco, we used Raman Spectroscopy to compare the plastics. Raman Spectroscopy is a method of capturing the chemical footprint of a specimen, in this case plastic. It uses a laser with a with a certain wavelength to induce "Raman Scattering," showing the specimens unique pattern.

Speaker 7: [4:18] The microscope sits in this cabinet and in this cabinet, when its done I'll open it and show you there is just a microscope and it has a stage. And we just gotta negotiate around with the stage so we have a piece of plastic that's in focus. And then I'll say okay we're good and then we're gonna close it down, in a very specific way to get it ready for the laser. And then we shoot the laser at it.

Speaker 3: [4:56] Mayfield Lake feeds into the Great Sacandaga Reservoir through a spillway. The Sacandaga is a man-made reservoir used to maintain water levels and control flooding in the Hudson River.

Speaker 8: [5:09] I'm here with E.S.T at the North Broadalbin Boat Launch, it's about 17 hundred hours. And we were here to see if there was any plastic nurdles and any other plastic we could find.

Speaker 9: [5:19] We have found this, there's approximately 10 pieces of plastic total, ranging from blue fragments and green fragments and some white pellets.

Speaker 3: [5:33] At these 4 test sites, plastic was collected the visually matched what we had found in Mayfield. This suggests that the plastic may had traveled the distance of approximately 30 miles from Mayfield Lake to the upper Sacandaga. This is concerning because it is unknown at this point if the plastic could travel through the Conklingville Dam and into the Hudson River and from there, end up in a water treatment plant for drinking water or the ocean.

Speaker 6: [6:00] But why should we care about any of this? Why should we be concerned about some plastic pellets in a lake? Why should we care if they move around to the water systems? Plastic pollution can last for many, many years after its creation before it's broken down completely. Meaning that throwing plastic away to a landfill or dumping it somewhere is not a viable option to getting rid of it since it will still be there for so many years. But plastic is a major problem for other reasons, not just its long lifespan. Microplastics, a small army of impossibly tiny plastic bits that have infiltrated nearly every corner of the globe and can be found everywhere, especially in the water and even in humans. Plastic has been found in fish and other animals and is associated with the deaths of countless amounts of marine life. But the death of sea life is only the beginning. The same fish that eat the plastics are often one in the same with the fish that are caught, killed, and served to people around the world to enjoy. Sadly, it still doesn't end there. There is so much plastic collecting in our oceans that in some places there is more plastic than sea life. There is no corner of our world that isn't touched by this modern horror. But like any horror of the past, like any Asian plague, we can move past this and overcome it. We can stand against its crushing weight and reclaim the Earth from the plastic apocalypse. But in order for that to happen, we must take a stand against and stop using so much plastic in our everyday lives. Eliminate single-use plastics such as bags, straws, water bottles, and packaging, in favor of natural alternatives. Push for the clean up and removal of plastic pollution and call for the companies who normally continue to produce single use materials and destroy the world for profit, to stop or face prosecution. The time to stand is now, will you join us?

Music: [7:56] ♪ With the waste and pollution of man's evolution ♪ ♪ The beauty is all faded so fast ♪ ♪ Roll down flowing all around ♪ ♪ I remember your current so blue ♪ ♪ Past the trees down to the sea ♪ ♪ Old friend what's happened to you ♪ ♪ I once knew a mountain ♪ ♪ With strong arms of stone ♪ ♪ And shoulders that held up the sky ♪ ♪ With eyes craved from glaciers ♪ ♪ It watched the world turn ♪ ♪ As the breeze drifted lazily by ♪ ♪ It stood tall and proud ♪ ♪ With its head in the clouds ♪ ♪ But the mighty peak shrinks every day ♪ ♪ From greenhouse gas and the heat come to pass ♪ ♪ Its ices all melting away ♪ ♪ Stand tight touching the sky ♪ ♪ I remember your soul, so right ♪ ♪ All be strong, won't be for long ♪ ♪ Old friend it just isn't right ♪ the water ♪