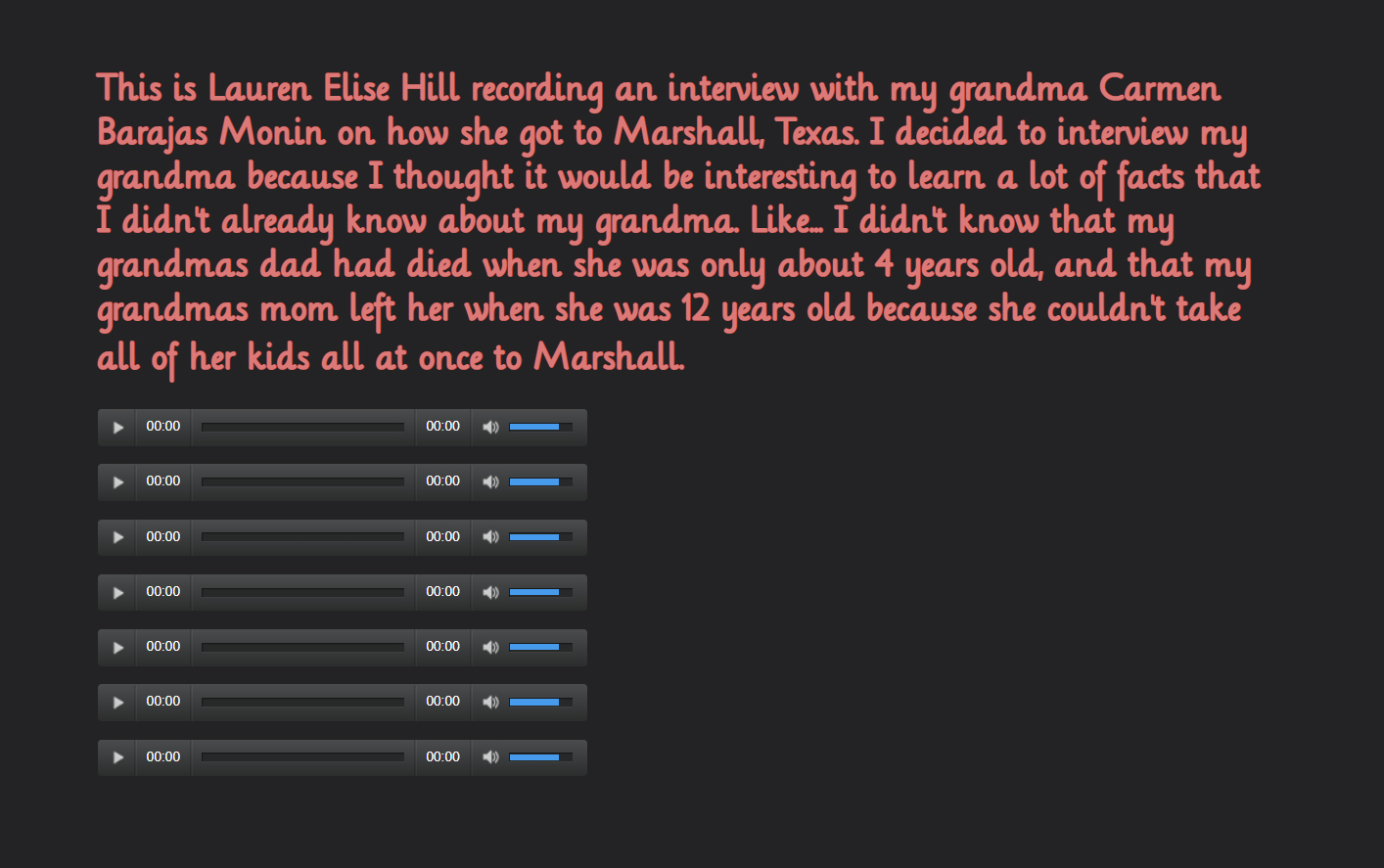 Seventh grade students in Marshall, Texas, worked in coordination with the Texas State Historical Association and National History to create multimedia websites that includes interviews with family, friends, and local residents. The work was supported by Museum on Main Street's Youth Access Grants in 2013-2014. In this project, a student interviews her grandmother and created a companion website about her work.

Carmen Barajas Monin (00:05): I came here in January of 1963. I was 12 years old. My father had died when I was almost four years old. My mother left Mexico and came to the United States in pursuit of a brighter, better future for herself and for us too.

Carmen Barajas Monin (00:24): My mother left us with her parents. She was not financially able to bring all five children with her to the United States at once. She was making only $8 a week in a tortilla factory. So she had to continue to work and save to bring her children to be with her. In 1961, she brought the two oldest, Maria and Socorro. In 1963, she brought Francis and myself to the United States. At that time, she was working as a dishwasher in the nicest restaurant in town and was making a whole $20 a week. It was not until 1966, after my grandfather died that she finally brought my brother, a friend to be with us in Mission, Texas.

Lauren (01:19): So, you met and married my grandpa in Mission, Texas. How did you and your family end up in Marshall, Texas?

Carmen Barajas Monin (01:30): We moved to Marshall in 1977. I was married and blessed with three children at the time. We move you looking for better opportunities. And I have a sister that lives here with her family. Your grandpapa took a job as a melter in the furnace at Smith Steel Casting Company here in Marshall.

Carmen Barajas Monin (01:52): I transfer from JC Penney in McAllen, Texas to the store in Longview. I eventually took a lower position at JC Penney's in Marshall because gas had gone up to 79 cents a gallon and I couldn't afford the gas. Two years after we moved to Marshall, I had your mama.

Lauren (02:15): I can't imagine how hard that must have been moving to another country when you were only 12 years old. What was that experience like for you?

Carmen Barajas Monin (02:27): It was very hard living. My grandparents, aunts, and uncles, cousins friends, school teachers, it was frightening at first. We rode a bus from my hometown to Reynosa, Tamaulipas, which is a border town. It took a little over 24 hours to arrive there. We left the tropical environment and when we arrived to the border, we had to walk across a suspended bridge. The wind was blowing so hard that you could feel the bridge moved. It felt like it took forever to get to the American side.

Carmen Barajas Monin (03:05): The temperature in Mission, Texas that day was in the mid fifties with dark gray skies. We thought we will freeze to death. Learning the language was very hard. What made it more so was that I had to stop going to school to join the workforce at 13 years old. You have to remember that back in the day, the laws were not as protective for children's education was concerned.

Carmen Barajas Monin (03:36): But I kept going to night school until I was able to earn my GED. I met and befriended a family across this street from our home. They were very kind and caring to me and my sisters. I will later meet and marry their nephew, which is your grandpa.

Carmen Barajas Monin (03:56): Years later, I applied for my citizenship, and on June 9, 1977, I was sworn in as a United States citizen. A couple of years after having your mama, I decided to pursue a career in nursing. Obtaining my nursing license from Oscar B. Johnson School of Nursing, Panola College. I was able to do this with God's help and the support and encouragement of my family and new friends. The biggest motivator being my four children. I was so blessed to have such a supportive family and friends, especially friends that I had made through nursing school and church. When we first moved here, there were only about three Hispanic families in town, including ours.

Lauren (04:52): Considering how far you have come and how much it has changed, would you say that Marshall is your home now?

Carmen Barajas Monin (05:03): Yes, with three out of four, my four children living here as well as eight of my grandchildren. Although I still go to Mexico at least once a year to visit family, Marshall is my home.

Lauren (05:19): What did you think about Marshall when you first moved here?

Carmen Barajas Monin (05:24): We moved to Marshall in the winter time and lived in the country. We had known Christmas Day and it was the first time our family had seen and played in the snow. Not only were we amazed by the different climate, but also the scenery. We moved from flatland and palm trees to hills and pine trees. The people were so friendly and hospitable and we adjusted to our new surroundings easily.