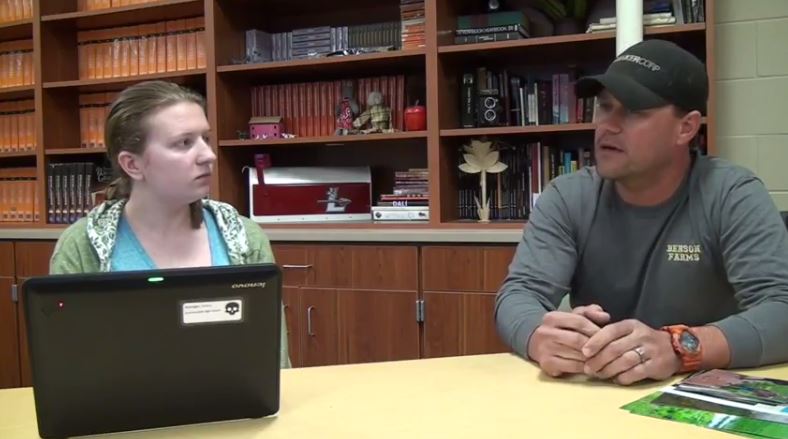 Nicholaus Benson of the Levee Commission discusses what a levee is and the levees in the area that affect residents. Students, sponsored by the Lawrence County Historical Society, Illinois, also ask questions about the frequency of floods in the area and what happens when a levee breaks.

Nicholaus Benson (00:08): The levee is an earthen structure, essentially built tall enough to... It's built to U.S. Army Corps specifications for our county, to hold back a 100 year flood, is what it's supposed to be built to hold. So our levees mostly will hold a water level on the Wabash River of about 29 to 30 foot river. If you watch river levels and the things the National Weather Service puts out, that's about what our levee is built to hold on the Wabash River and we're lucky enough where we live, that there are two rivers that come together in our county. So the Emberras levee is also a concern, which is North of Lawrenceville here. And it's only about four or five mile stretch of levee but it's very important because the same area that will flood from the Wabash will flood from the Emberras, as well. And it's built to hold about a 40 foot river level give or take six, eight inches here or there. So, it's all based on the structure and the height of the structure is all based on elevation off of sea level. And so therefore we pay attention to the river levels and... But the levee itself is a structure built to hold back that levee. And protect farmland and houses and businesses, the city's water sources.

Avery Kasinger (01:34): What are warning signs of a levee for when it's about to break?

Nicholaus Benson (01:42): Well, I guess in a general aspect, overtopping is bad. So if you are watching river levels and they get to a certain point where they actually start running over the levee, they will start, in many cases, they will start eroding on the outside of the levee and just cutting into it. So the erosion of the actual water running over will cut back into the levee. And before, you know it, it can cut all the way through and you'll have a breach there. So overtopping is a warning sign.

Nicholaus Benson (02:13): A boil, which is essentially nature's way of whenever the pressure from the inside of the levee finds a direct route or a tunnel underneath the levee. It'll pop up on the other side and create a hole. If that hole is running fluid that's running dark or milky or big chunks of earth or mud, that's a warning sign. That's if, a lot of times, if that boil's running clear, you just let it run because it's essentially just letting pressure off the inside. And it's not a bad thing. However, if it gets real milky in color and dark, then that's a warning sign.

Nicholaus Benson (02:56): And then another warning sign would just be if you're holding water levels that are currently at the top of the levee and you have another rain on top of that at your location, that's usually a bad thing as well. So as we realized in 2011, when we had that happen, so...

Avery Kasinger (03:16): Okay. Is there anything you guys can do to prevent the levee from breaking?

Nicholaus Benson (03:23): Oh sure. In 2008, that was, I was actually not even on the levee commission that year. I was just helping as a volunteer. Of course, I mean, we're all volunteers anyway, but I didn't have a title or anything like that. I'd just been around the levee for a long time. And I was on there with some guys that had been on it all their life, and they had never seen the water rise like it did in 2008. And so a year like that, whenever you get so much rain, because there was a band that year. And if you'll go back and look at the record books from essentially say Effingham, Illinois, over towards Terre Haute, Indiana, which is right in the bread basket of our tributaries that feed our rivers down here, there was over 10 inches of rain that fell in four to six hours.

Nicholaus Benson (04:10): And so when something like that happens, that amount of water there is really all you can do is try to warn people and get people onto high ground and tell them to get their personal belongings and stuff out. But in most cases, there are a lot of things we can do to keep the levees from breaking. We actively sandbag. In times of high water, we are running patrols up and down the levees, every three to four hours, just looking for either new boils, groundhog holes, erosion, overtopping, those types of things. So really the biggest thing is just, we're just constantly on it and being, making people aware or making ourselves aware of any problems that we have.

Nicholaus Benson (04:59): That's a good question. There's, it seems like it's becoming more and more frequent. And if you look at the history that the National Weather Service keeps, five or six of the top 10 floods are in the past 20 years. I think a lot of urban sprawl upstream has a lot to do with it. I went to school at Champaign and, you go back and visit Champaign year to year, and there's just a ton more concrete poured, more asphalt down. And you, and I both know whenever rain falls on concrete or asphalt, it has no choice but to run off, it's not absorbed. That is the single biggest thing I would think.

Nicholaus Benson (05:40): And maybe our weather patterns have changed a little bit where this area of the world is getting more Gulf moisture and more interaction with jet streams and stuff. We're getting more rain in this area.

Nicholaus Benson (05:56): And then also, field tile. Although some farmers might say that that may not be, I'm kind of up in the air on it. There's a lot more tile that's been put into farmers, agricultural fields. And so where that tile used to sit or pond or stuff, it's now, when it comes down to the ground, it's put out tile outlets, right into ditches that feed rivers and that type of stuff. And so...

Nicholaus Benson (06:22): Also some of the rivers, when they have these kinds of floods, they silt in the bottoms, so you still have the river in the same place, but a lot of times the bottom is filling up. So sometimes we're just not able to hold as much water. And so flood events become more frequent.

Avery Kasinger (06:39): Yeah. When the area is flooded, what do locals or the National Guard do to help other locals?

Nicholaus Benson (06:47): Our area, our County has really never had much help from the National Guard. Now, as far as volunteers, there's about three of us, there are, there's three of us that are on the levee commission, there's five advisors that we have on our board. Throughout the year we're maintaining and watching. I mean, we're constantly mowing spraying, keeping trees cut back, trying to keep our levees improved and up to the best standards there are. But during flood times, we rely on probably, there's, I would say a core group of 30 to 50 local guys that live out there on that farm or that farm out there and live out there on the prairie.

Nicholaus Benson (07:32): In 2013, whenever we held back, one of the biggest floods in recent history, we didn't have any breaches that year, but we actually used high school kids. I don't know, maybe some of you in this room were there sandbagging. And I really think that outreach to the local schools and stuff, and those sandbags at the, because we'd been filling sandbags for three or four days, the guys that work on it all the time and nobody had any sleep. I think that saved it itself.

Nicholaus Benson (08:00): And so we get a lot of local support. And especially after the breaches we had in 2008, people were way more aware of the area we live in and what can happen. And so people are eager to help and try to preserve what they have in this county.