Lawrence County Floods, Illinois: An Interview with the Gerhart Sisters 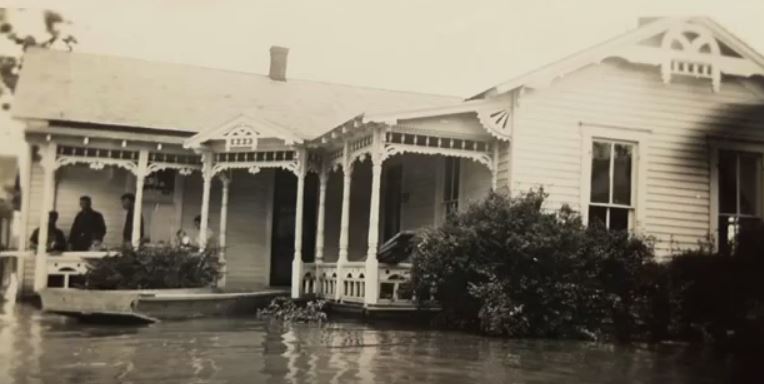 Sisters Sue Gerhart and Rose Gerhart Robison recall the flood in 1943 when their family evacuated in the middle of the night. They talk about how much water came in their house, how it was removed and the damage that remained. They also mention horses being put in a church because they didn't have time to evacuate them. The financial cost of flooding is also explored.

Sue Gerhart (00:03): Well, my name is Sue Gerhart. And my very first flood was the 1943 flood and I was seven years old. And at that time, my home was not very far from the river. And I actually slept on a straw mattress. I can remember, and I know that my family was very concerned because they had lots of rain and the high waters were coming up on the levees, and they were afraid of it breaking, but it hadn't broken yet. And in about 2:00 in the morning, mother and daddy came in, and woke me up, and said, "We are leaving." That the levees had broken. And I actually remember that day or that night. And mother and I guess Rose and... I don't remember anybody else but me. We went over Aunt Rosie's house, which was about two miles away.

Rose Gerhart Robison (01:04): Okay, my name is Rose Gerhart Robison. And I lived in the same house she did. I was four years old, and I don't know whether I made this up, but this has always been at the back of my mind. I remember mother getting us kids in the car. We had a '38 Chevy and I was in the backseat standing up and I was looking out the back window to see if the floodwaters was coming around the corner. I guess, I thought it was going to come by the road.

Sue Gerhart (01:30): If you know where we live out north of Lake Lawrence. it's called Allison Prairie. And so it's really a flat land, so the water can easily get there.

Speaker 3 (01:42): And so like you said, you guys just packed your things and you left. Have you guys been preparing for that in advance or did you even know about how susceptible you guys are to floods?

Rose Gerhart Robison (01:58): But you know what horses are? Wood horses? So he put the furniture up on those horses. And he stayed in the house, even though the house had four inches of water in it.

Sue Gerhart (02:08): It only got up eight inches in our house. And we had wooden wallboard. And so it just got to the very top.

Sue Gerhart (02:21): Inside the house, mm-hmm (affirmative). And then, to get the water out of the house, daddy drilled holes in the floor. Each one of the...

Speaker 3 (02:38): And even after the flood is gone, there was still damage from the water all throughout the house?

Rose Gerhart Robison (02:42): After the flood, the floors were buckled. But I mean, she went ahead and sanded it down. But I mean, they're still like that and the holes are still on the floor.

Rose Gerhart Robison (02:50): Oh, another thing about the '43 flood, the Rising Sun Church is just a quarter of a mile north of our house. And some of the neighbors didn't have time to get their animals out. And so they took at least two horses and put them in the church.

Speaker 3 (03:05): You can talk about what's some of the damage that you experienced after the flood from the water? Whether it be, like you said, you talked about your house. Maybe financial or just how it affected you before and after the flood.

Rose Gerhart Robison (03:16): Okay, it happened in May. Now I don't know how many crops were planted, but to get a good crop, you need to plant. Not anymore, they're planting right now. In fact, there's already corn up. But back then, they didn't really plant until around the 1st of May. So it would have destroyed the crop that was there. And it would be too late to replant the crop after the flood was over. They could probably plant beans, but I mean, that would make a really late crop in the fall. So it is financially devastating too.

Rose Gerhart Robison (03:56): It washed the pavement out.

Speaker 3 (04:00): People that don't experience floods, they think it's just water. They don't really understand the damage a body of water can actually cause too. Like you said, your own home.

Rose Gerhart Robison (04:09): We was in the boat, we went down to the neighbor's house. After we left, we went over toward the road, where there was a fence along that road, and we got stuck on a fence post.

Rose Gerhart Robison (04:21): So my father made us all get in the back of the boat, that puts all the weight back there. Of course, we weren't very big then like we were now. Anyway, then he reached around, and he kept pulling on that post, and he finally got us all. But I mean, that was scary. In 1959, the flood was in February. And my sister and I... I skated on our front yard. The ice froze hard enough that we could ice skate. Ducks, that's the stuck duck.

Rose Gerhart Robison (04:51): That's the vehicle that goes on land and water. We're not talking about it right now.