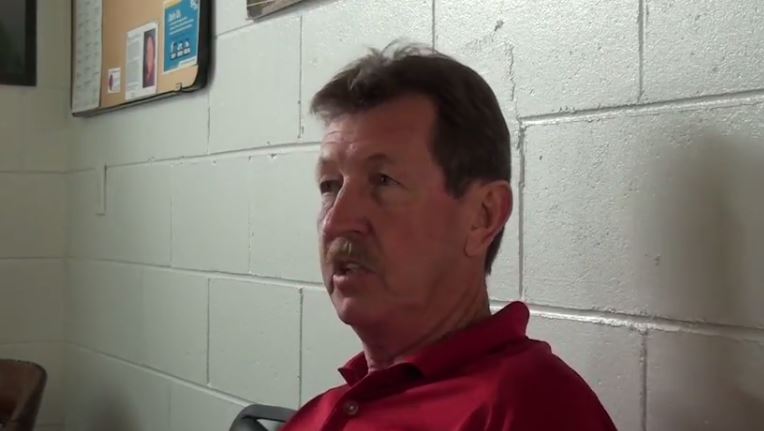 In 2008, Lawrence County’s flooding problems were compounded by a break in a water line that affected three cities. Lawrenceville-Allison Fire Chief Mike Mefford recounts how emergency personnel had to find the break and transport water to locals who didn’t have any, all while preventing flood water from getting into the regular water supply. This interview was conducted by Lawrenceville High School students.

Mike Mefford (00:37): ... come from the city of Lawrenceville's well field, which is located out there on the prairie, the Allison prairie. And there was a location where they went under the US 50, the highway, and of course, the time when the levy broke, it broke upon the north side of US 50. So the water flowed from north to south, and when you got to US 50, you just got where the overpasses are for the ditches, well this one water line laid along the side of the ditch and buried under there, and with that current flowing through there, it washed that waterline out, and once it did, it separated it. Well at the time that it occurred, it was unaware of where the break actually was. We just noticed. I got a call about 6:00 in the morning that there was no water pressure out at our station where our instant command was.

Mike Mefford (01:41): So I got a hold of Bruce Lashley, at the time was water superintendent, and made him aware of it, and then we knew we had a water issue. So we had to go into that water conservative point citywide and notify the other cities because Bridgeport and Sumner also relied on the water coming from the water field out there. So what had occurred that water line had separated under there, and of course, the water pumping from the field was actually going out into the flood waters. So it ended up being, and we rely a lot on other departments, so as we sat up the system, trying to locate this water break, we contacted divers from Vincennes township fire department come over and they dove down to the area of the valves where the valves were and they shut those off, so we could shut any floodwaters getting into the water system.

Mike Mefford (02:52): Then eventually they had to go out in the area and pump air into it, and the lines actually come to the top and we can tell what the break was. Then we knew where the issue was. Then you could isolate which ones were the problem. But in the meantime, one of our issues was, we was still supplying at least sanitation water for the cities, and the concern was that if you got flood waters, how much got into the water system? So that's where our water supply came in from the state bottled water come in, and that's why we went into those that stage. But in the meantime, we needed a potable water for sanitation for all the housing. And at least people could take showers or something like that.

Mike Mefford (03:51): At the 13th Street Water Plant, we set up a tanker shuttle with fire departments from all ... We had 11 or 12 fire department started delivering water and we were transporting water and we'd go to Vincennes or other out of our area and transported water there. So that's how that ... and we continued to supply at least sanitation water that people could flush toilets and things of that nature. And that's how we continued to supply water to-

Mike Mefford (04:23): Yeah. And then plus we had to be concerned about if we had a big fire, an actual incident occurred during this time, because we didn't have a water supply in Hartsville. So we also had other departments that were on standby to bring us additional water in, so that was where we went with it.