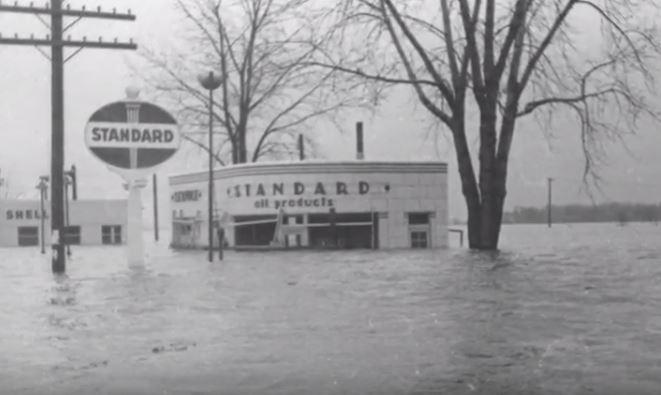 Muriel Brumley of Lawrenceville High School, Illinois, interviews resident Dorothy Hennessy about her experience of major flooding in 1943. They discuss the effect on families in different areas and what it was like to have a natural disaster during World War II. Contrasts between that flood and the most recent flood in 2008 are also highlighted including why floods in the area are so different now.

Speaker 1 (00:13): So we'll be talking about the flood of Lawrence County and you experienced what year?

Dotty Hennessy (00:28): Oh, the most? I remember George Field was after the air force base out on the Prairie and they had to bring in the coast guard and we were in Girl Scouts, senior Girl Scouts, and they came in their uniforms and amphibious Jeeps and they rode through town on State Street and we got to wave at all of them, really exciting. But they came because the Prairie was flooded and they brought families into town. Put them in the armory and different places, churches.

Dotty Hennessy (01:17): We really weren't. My dad worked in town and we didn't have a car at that time, so we weren't going to go out of town.

Dotty Hennessy (01:28): So our family really wasn't affected. I had grandparents that lived up near Flat Rock, but it didn't flood that far up. But it was an unusual time. War was going on, soldiers coming and going. We had a curfew at night and blackouts, but we were concerned about the families on the Prairie. [inaudible 00:02:04] Helping them out, getting food and clothing and bedding to them, making sure they had enough to help them out.

Dotty Hennessy (02:22): Yes we had several. Catherine Thompson and some of you may know Catherine, she had children and grandchildren that went to school here and they lived out on the Prairie. It was hard for them.

Dotty Hennessy (03:24): Now that was the rumor. I don't know. I never found out if that was really true or not, but I could understand because ours was all farmland.

Speaker 1 (03:42): So do you know how often the area flooded? So during your lifetime, how many times do you think you've experienced a flood?

Dotty Hennessy (03:52): Well, as I recall, for a couple of years, it flooded not that bad, but I remember one year we couldn't go out of town for prom. We always tried to go out of town for prom and all areas except going West... who wanted to go to Bridgeport. But all entrances were town, in town we could go out a little but not very far. So that was pretty often, I would say every couple of years back then. And maybe it was because they hadn't fixed the levee yet.

Dotty Hennessy (04:45): Yeah, they probably couldn't. I imagine it would be quiet, after the one in '43, I think it would be very difficult to get it built up again.

Dotty Hennessy (05:05): Well, I recall, especially in [inaudible 00:05:09] because we were so disappointed about our pool being gone, it came with up later when we could get to Vincennes. You could see the water line, well it came within a foot or two of the roof.

Speaker 1 (05:32): Yeah. That's interest... it's hard to imagine, I guess for us, because I mean the younger generation, we haven't really experienced a flood.

Sounds right. But it wasn't really that deep compared to what happened in the thirties and forties.

Speaker 1 (05:54): So, so what we're saying is that flooding has probably been more severe in the past than how it is currently.

Dotty Hennessy (06:00): Oh I think so. I think they've been able to keep up with the levees and keep them higher. And we just haven't had that much rainfall. Well in 2008, that was bad. And the levee did break a little.

Dotty Hennessy (06:21): And yes, then the drought, of course it makes it worse, but no, not near as bad as it was. They just didn't have the equipment probably at that time to take care of it.

Speaker 1   (06:36): So do you think now the residents of Lawrence County, do you think we're more prepared or is it about the same or is it worse than how it was?

Dotty Hennessy (06:45): No, I think they're more prepared, especially the people that live on the Prairie, they know what could happen. And, although there's still some that decide not to leave, and have to be voted out. But I think we're more aware.

Speaker 1 (07:06): Yeah. I think that's true. I know just me growing up you hear more about how to just deal with what's happening and how to help everyone around you.

Speaker 1 (07:19): One thing I did want to ask you, was it difficult for everyone to return to everyday life after the flood dissipated or...

Dotty Hennessy (07:25): Well, I'm sure it was for the ones on the Prairie. But we were lucky to really have had George Field out there. I don't think George Field flooded. I think when they built that they knew it was in a flood plain and they built it up so it wouldn't flood. And that was the reason they could bring in the Navy and the coast guard. But the families, I think there were probably more farm families out there than there are now. And just really hard for them. It would be terrible to have to leave your home, come into town and sleep on a cot.

Speaker 1 (08:09): Yeah, I'm sure it was a hardship for everyone. Even, it's kind of an inconvenience for those who've lived in town. You can't, like you were saying, you go out East and you couldn't go anywhere else.

Dotty Hennessy (08:37): It was just an exciting time, but a bad time with the war going on. And then this big flood that came. But our scout troop would go out every once in a while and sing for the soldiers of the air force and men that were in the hospital and the USOs in town. And our senior class or scout troop could go up once a month, I think, highly chaperoned and go to the dance at the USO. But again, we were very fortunate to have all that help from the air force base to come in with the flood and take care.

Speaker 1 (09:32): And help you guys. I'm sure it was a blessing and a time of struggle. But I want to thank you for coming and talking to us.