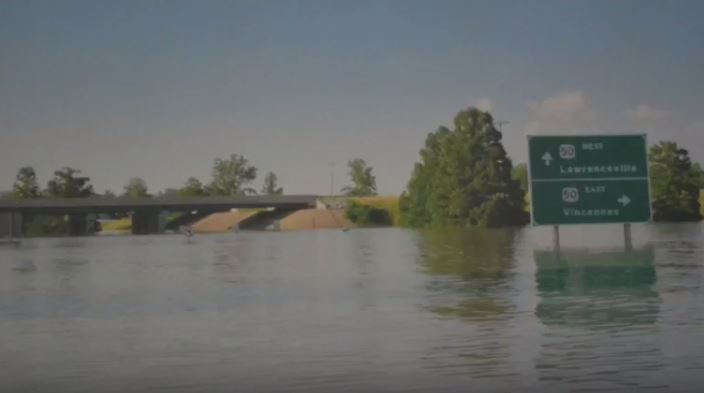 Retired farmers and former Levee Commissioners Charles Primus and Norman Kocher discuss the levee and flooding over the years in the area, particularly the effects from the 1943 and 1950 floods. They have also patrolled the levee and rebuilt it after floods.

Norman Kocher (00:16): I'm Norman Kocher and I was raised by South [inaudible 00:00:19] Apple Church, till I growed out. And then I came up here, my dad bought a farm up here in Russell Township and I moved up here in 1960 and I farmed for '72. In the 1972, I quit farming and I went to work for plastic plant over at Orville that made these plastic drain top. Worked there for six and a half years and then I went to work for a contractor over in Indiana. I worked for him for five years and we started our own business. Three of us started this business, we put up center pivot irrigation systems. We built terraces, waterways, work on levees. We put tile in, about anything else... We'd do a lot of things sometimes not twice. Just that one time anyway.

Speaker 3 (01:05): I've seen pictures of you like patching up things. How far do you actually like patrol the levee whenever the water gets high?

Norman Kocher (01:17): Okay. It starts up here in North of Russellville, about what two miles?

Norman Kocher (01:21): About two mile. It goes all the way down... You know, where the Mighty Apple Church is? You know where Kings is?

Norman Kocher (01:28): Okay. Right straight South of Kings is where it ends. Follows the river round. I mean, it follows it around, see. And then you go over to the Embarras and starts there by a Mike [inaudible 00:01:42] house. And it goes all the way around, throughout one there's about three and a half miles of that, went over there.

Speaker 3 (01:48): And what do you think was the biggest flood that you guys have witnessed over the years that you've worked for this?

Norman Kocher (02:05): I was. I remember that one. I wasn't very old, but I still lived out of the church then. And I remember hitting the sales underneath the house. But any other time the closest they ever got that house was in the road ditch across to the side of the road.

Charles Primus  (02:30): Right up to the foundation, fill the basement and everything. So...

Speaker 3 (02:34): Right. So you feel like around here, people are pretty prepared for floods.

Norman Kocher (02:40): Some places, some places are not really. I think the problem with the 2008 flood, they hadn't had one 50 years and everybody forgot about it. They didn't realize what could happen. And then it broke in a bad place when AMRO broke. They only had like 40 minutes of an hour to get the head out. Because of too close to the houses see. Now over here we had more time. Over here we probably had about 12, 24 hours?

Norman Kocher (03:19): Well see, it come down route 33. It come down there over along the levee as low spot over there. And it come down right here behind my house. Then it come down here over on the other side of the Hill and then it went plum over. It went plumbed through North Russellville and then went all the way down and come over here two miles. There was a field plowed over there, along the ditch. And whenever that water went down, you could see the plow marks. It took all tops all off. So you know, that water's pretty stout. It's pretty tough.

Charles Primus  (03:52): The way it broke this last time in 8, 9 and 11 both was down South, South of it, up here. And it kind of filled in and worked back up North. Well, the river went down fairly quick, both times. So then it receded and went back down. But 43 and 50 had a couple breaks North of town, up here. And then one just drives South of the town. It filled everything up here first, then run South and they got hot up here, right over the levee down there or come on the outside and then remember the levee going the opposite direction-

Norman Kocher (04:36): Well it filled everything up, sea full of water and there wasn't a way for it to get out down South. They bought homes on the other side of the levee and it stuck down in my dinner, set it off.

Charles Primus  (04:45): Section it, cut it out a little bit and then let the water down and put in a set of coal bricks than what they put in.

Speaker 3 (04:52): So can you tell us more about like what you guys do to prevent crisis in levee like-

Norman Kocher (04:56): Well, we, in the first place we keep the groundhog, so there are no groundhog, drew beavers or something digs in the levee because if they do that causes the weak spots and it cause you trouble in a hurry. And then whenever the river starts up, when he gets about 20 feet, we start patrolling and we run that levee. And the higher distance the more often we patrol. And we may have what? 30 guys.

Norman Kocher (05:21): At a time saying we got a headquarters. There's always somebody there at that headquarters. We've got sandbags failed, we've got sand in different spots along the levee. So if we need sandbags, we got sand there. We get the bags there and get them filled and put on top the levee to keep it from going over, down in the bottom, down South. But they had to move all those in boats. They had seven boats, they hauled in filling boats folks sandbags, and they went down the levee and took them out from the boat.