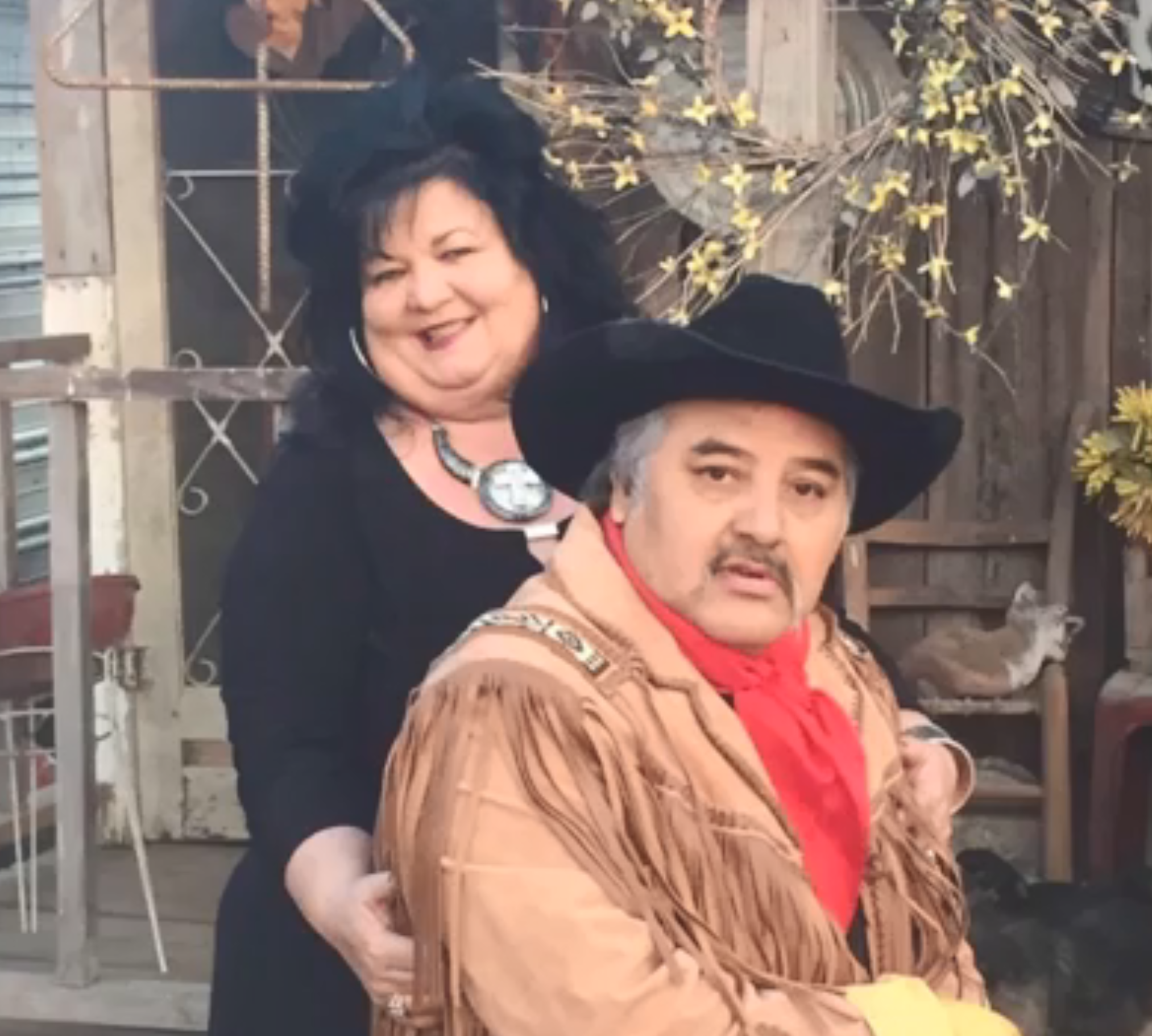 EAST students at Kiamichi Technology Center in Poteau, Oklahoma recorded Joe Perry describing what faith, family and culture mean to him as a member of the Choctaw Nation. In addition to creating this story for MoMS' Stories: YES program, students also developed an exhibit at the LeFlore County Museum at Hotel Lowrey with support from the Choctaw Nation of Oklahoma. Read more about the project here.

Find the video recording at the bottom of this page.

Joe Perry: Faith, to a Choctaw, I mean, and I guess to everybody, it's really personal, but my father was a minister. He started out as a Methodist, and then he switched over to Baptist before Oklahoma was even a state. I was born in 1956, and Dad was 80, no, about, how old was Dad? 74, yeah, Dad was 74, so I was a late bloomer, I guess, you know, but he never pushed his religion on us, but it was just something that he lived, and he was an example to us, and part of that faith was there was an old saying back in the day that if you shared someone's salt, you shared their troubles and their problems, too, so Dad kinda brought us up on that, and anybody who came to the house was just automatically fed.

Joe Perry: [1:21] Ours was kind of a revolving door back then, and that was just part of the faith and part of the tradition that when people come to your doorstep, if they was hungry, Dad and Mom fed 'em. That was just it. The faith and the culture nowadays, the Choctaw has kinda adopted the white way to worship, and there's a, the culture's changed so much that even as when I was a kid, when Miko, that's the chief, when Miko called or talked, everybody just shut up and listened, and when Tuskahoma came around, that was more of a religious ceremony then, when I was a kid, but now it's more commercial and it's just like a fair or a party or something, and when Miko speaks now, the last time we was there, I noticed the younger generation was on their phones texting or, but when he spoke back in the day, everybody stopped what they was doing and listened, and the last Choctaw walk we went on from Skullyville to the center out there, the chief started off walking, but I noticed several people passing him up like it was a competition, and back then, our culture, the early, you know, the last of the culture, I think this is the last generation, really, because I watch the young people and they don't think the same way we did.

Joe Perry: [2:55] But I noticed several people passing up the chief, and that wasn't, if he slowed down, we was supposed to slow down. He speeded up, we walked faster, but that wasn't, and so I think that was my last walk. And then we was at a, and see this all, the faith and the culture is intermingled together, because the way we was taught is completely different from the way the young folks perceive it now. I mean, you go to church now, and it's anything goes, but back then you went to worship, and the services there, they could take all day and nobody complained. They'd stop for lunch, and they'd, I don't know, some of the older Indian ladies, I wasn't too much, didn't get too involved with the Methodist.

Joe Perry: [4:09] I come along later, when Dad had switched over to Baptist, but I remember the Indian ladies, they would have dinner on the grounds, and they would have big black pots of what they call , hog meat, and they'd deep fry it and then they'd make , and I remember growing up on stuff like that and... You could go to different camps, and you was everybody's kid, and I guess that was my favorite part, because I liked being everybody's kid. And I'd come in the older women, they would correct us if, you know, we cut up too much, but you never got turned away if you went to their camp. You was always offered a plate, and that was just part of their faith. That's what they knew, that's what they believe, and... That's how it was at Dad's house. He was a Baptist preacher, and he believed what he preached, and he handed that down to me. Back then, our culture was... we really didn't know how to lie.

Joe Perry: If they told you something, that was the way it was gonna be, or they would die trying. And I remember stories that I've heard from the older Indians that they would, I probably wasn't even supposed to've been listening, but you know how kids is nosy even these days, but I would sit around listening to the old folks, and I've always liked to hear their stories, and they would tell about Indians, back during the days when they would still hang 'em, that there was not an Indian that was due to be hung that never showed up.

Joe Perry: [5:31] They would let you go home and make things right with your family, get things all prepared and everything, and they would take care of everything, and the day that they was appointed to be hung, they would show up. They never ran. They never lied. If they told the judge they'd be there, they would be there. I think nowadays, the blood has thinned out so much, you know, if you let 'em go now, they'd be going to Canada or somewhere, you know, but back then, that was part of their culture, that was part of their belief, and I got in on the tail end of that, and I still try to live, if I tell somebody I'm gonna do something, I want to be able to do it or I won't say I'm gonna do it, but that's just the way we believe, and that's how I see, I would love our younger folks to hang onto some of what we're losing.

Joe Perry: [7:12] When I started to school, I think it was like 1963, I believe it was, I didn't, I could speak from listening to my brothers and sisters, because they'd gone to school before me, you know, and they'd come, and I'd listen to them. I could speak the English language, but around the house, it was mostly Choctaw that we spoke. Mom spoke, she could speak English fluently, Dad, not so much.

Joe Perry: [7:41] He spoke Choctaw most of the time, but if you don't use it, you lose it, and I've noticed I've lost a lot of my ability to speak the, I can still tell when somebody's talking about me . I can converse a little bit, but you know, very little anymore, and it's something that we've lost, and I love, I really appreciate they're teaching the Choctaw language in these classes and stuff now. We lose, you know, we're losing a lot, because when I started to school, we was not allowed to speak Choctaw in the school system.

Joe Perry: [8:21] Back then, if it wasn't an Indian's idea, you couldn't hardly push 'em into doing it. You could make us after a while, and that's what got me in trouble so much, because I didn't understand their idea... Of what they was trying to get me to do, because it wasn't my idea. It was something completely strange, and it wasn't part of my being. I didn't want to do it. The technology, the nation now has embraced it and they're using it to the Choctaw's advantage. They started off with bingo, but now they're calling it casinos, and I don't know if anybody even plays bingo anymore, but you know, so they've used that technology to bring an advantage, and they've advanced in medicines and sciences, and there's Choctaws, some of them are leading the way, so I think, and they're using the technology over these computer classes that they can teach the Choctaw, so I think it's a good thing.

Joe Perry: [9:34] The Choctaw Nation love the children, love their children, like I was saying earlier, they'd have different camps at these churches, and a kid could go to, well, anybody was welcome at any different time, but a kid, we got away with murder back then. We'd push the old folks, you know, but we was welcomed when they would say, it's time to eat, if you as at that camp, you didn't have to go back to your camp. I've seen the Indians go through this from where the government, what I call interference, when they was shipping a lot of full bloods to the big cities that had no idea.

Joe Perry: [10:21] They shouldn't have ever been there, but they was shipped off from boarding schools and first one thing and another, shipped to Chicago, New York, Los Angeles, and they wound up in the slums, alcoholics and drug addicts. They had no idea how to cope with that type of culture. It was something completely strange, and I know some folks that I personally knew had to go through that, you know, and they was trying to get rid of the Indian culture, but all they did was just make us stronger, more stubborn. Like I was telling you earlier, if it's not our idea, our idea, we ain't gonna do it. And so the nation, the Choctaw Nation is getting stronger and reviving, and I think we're gonna survive. We'll be all right, because now we've got Choctaw astronauts and Choctaw senators, and so you know, we're gonna survive.