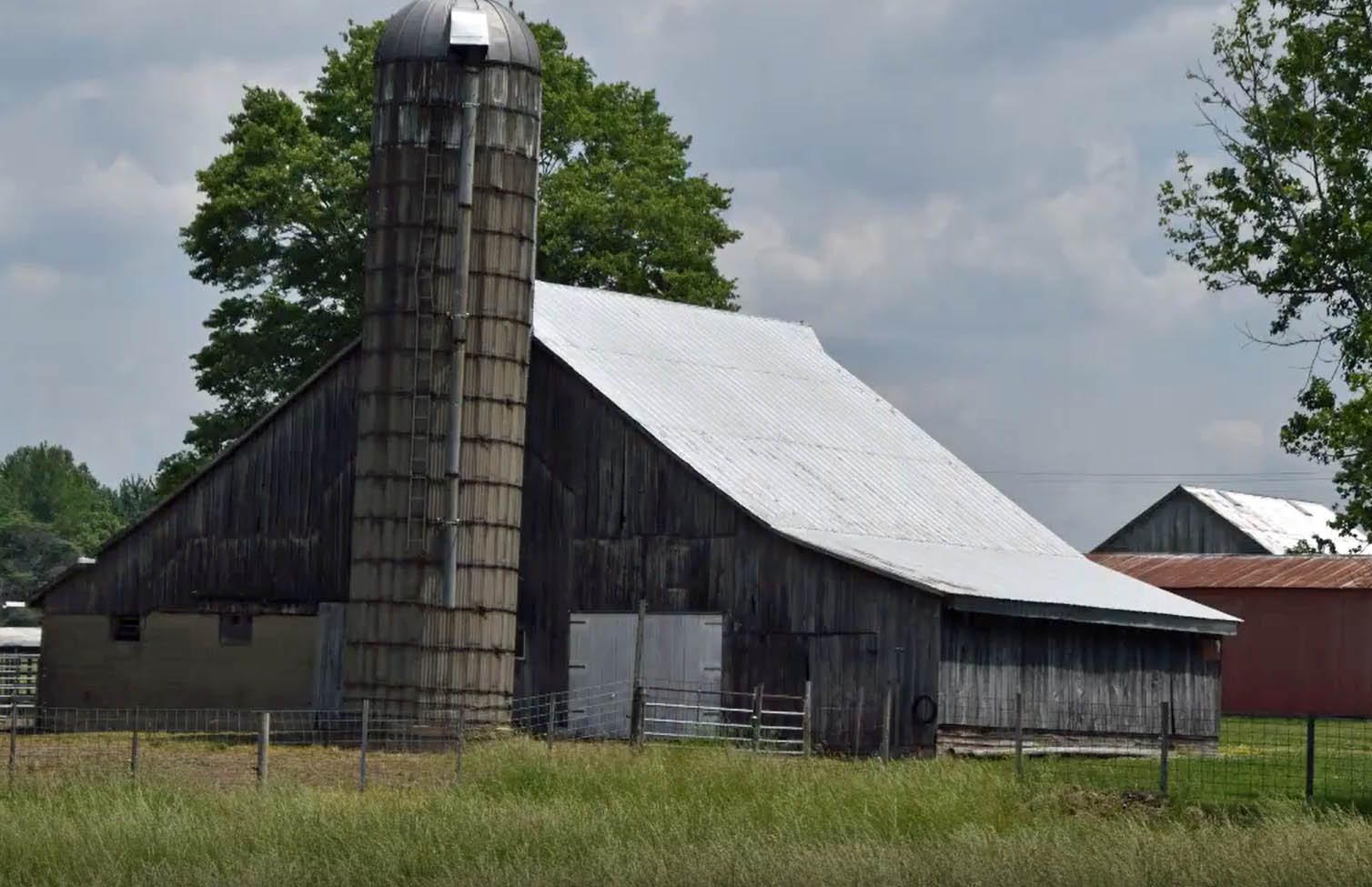 Students at the Jennings County High School in North Vernon, Indiana, worked with the Jennings County Historical Society to produce this short documentary about the area's historic barns as part of the Stories: Yes program at Museum on Main Street. The video was produced by Drew Yeager and Wyatt Brooks and narrated by Jaime Garcia.

Jaime Garcia (00:17): Farms are as American as apple pie, emblematic of our agriculture heritage and rural character but around the United States, many older and historic barns are deteriorating or disappearing, threatened by changing farming practices, urban sprawl and the complexities in maintaining these unique structures. The Indiana Barn Foundation.

Louise Malcolm (00:48): I've always loved the barns. I love the gray wood and the big beams and I've always admired the fact that man had to do that manually. They didn't have chainsaws, they didn't have big sawmills that could saw these trees and I also admired the trees because when we settled this country in the 1800s, there were some giant trees and you can look at barns that have been preserved and see the span of a 50, 60, 70 foot beam across the top of an old barn. And if we didn't preserve these barns, that wouldn't be happening. Most trees today don't live that long, or we harvest them long before they reach that size and so to me, preserving barns is a way of respecting both nature and the environment and man's ability to adapt it to his needs.

Jaime Garcia (01:54): Indiana has more barns per square mile than all but five other states. Our county of Jennings, located in southeastern Indiana, provides a good example of the challenges faced by those attempting to preserve these historic structures. This is a race against time and fraught with financial challenges but if you understand the story of Jennings County's historic barns and of the preservation efforts of a few individuals and families here, you can understand the story of barns in America. This awareness may provide us with the connection we need to prioritize the preservation of these vanishing structures for future generations.

Jaime Garcia (02:35): The Indiana Barn Foundation, a nonprofit organization providing grants to rehabilitate Indiana barns was established to unite those who value the legacy of Hoosier farms, who have worked against the odds, often single handedly and with no financial incentive, to maintain and preserve these landmarks as assets to Indiana's larger cultural heritage. In our community, Lou Malcolm, a member of this organization, is leading the charge to gather the stories of Jennings County's historic barns and at the same time, repurposing her family's historic barn.

Louise Malcolm (03:16): A state law defines a heritage barn as anything built before 1950 with tenon mortise joinery. I inherited the barn that we've been working on a couple of years ago. We got it from my brother. The barn that we restored was probably built in around 1900 and it needed a roof and the siding was falling off.

Jaime Garcia (03:52): Most historic barns in Jennings County are located on working farms, are used for storage or are sitting mostly empty and contain a few treasures from times past.

Louise Malcolm (04:04): My dad didn't have a barn on the place that he bought in 1932, so a neighbor was wanting to get rid of one. So they packed it up, wrote numbers on every piece and then moved it, horse and wagon, and, or drag it, probably was sled bottomed across country.

Louise Malcolm (04:27): ... owned by George Corya. George passed away last year but his family still owns it and the important thing about this barn is that it was a hayfork barn and the barn is huge, but it had to be in order to get the wagons in and out with these big bales. This is the Meg Ryan barn out on Highway 7, going to Columbus.

Speaker 3 (05:03): ... [inaudible 00:05:03] property, and we were just talking about the barn's probably around a hundred years old-ish. The history's a little bit fuzzy, but we've done some remodels and some updates in the past year just due to storm. So a lot of what you see is original. So you'll see the walls and things, but we've had to patch some of the walls because of some storm's damage. And then about a year ago, we had to actually completely redo [inaudible 00:05:30] as well. A storm came through and [inaudible 00:05:35].

Louise Malcolm (05:37): This barn, again in Scipio is to me the iconic barn of Jennings County. It's huge. It was built by Obadia Amic in the 1800s and is now owned by Max Wiley and it's just a beautiful barn because Max does keep it maintained, red paint and all. It has some distinctive characteristics as a hay barn because of the way they loaded the hay.

Jaime Garcia (06:14): Few rare gems of restored barns do dot the landscape of our state and country. The Peter Kinder homestead barn in the Southern part of Jennings county is an example of just such a structure.

Louise Malcolm (06:26): And the Kinder barn, that one dates back to the 1820s when old Peter Kinder moved into this neighborhood and they started building and Jane and Juda Kinder, the daughters of Roy Kinder redid that barn and made sure it was not just preserved but restored. So they restored it back to it's original and it even had a beam across where young Peter Kinder had marked that it was built, I think it was 1872. Stream Cliff Barn, built in the 1850s, if I remember right, is owned by Gerald and Betty Manning and they run Stream Cliff Herb Farms and it's a popular destination for us all to eat and there's a winery, et cetera. The barn is significant because it's one of the many throughout Indiana and throughout really the Midwest that have been turned into what I call an event barn.

Jaime Garcia (07:48): Betty and Gerald Manning were awarded the 2020 John Arnold award for rural preservation. Stream Cliff is home to a collection of 19th century buildings, including an 1821 English barn and a smaller 19th century barn. Six generations of the [inaudible 00:08:06] Manning family have lived on the property and maintained the land. This farm and its barn is an example of the growth of agribusiness as barn owners look for innovative ways to preserve heritage and make a living. Despite the differing purposes of these historic barns, all of the owners are motivated by a strong desire to preserve time and fuel the pull of connection to past generations and a former way of life based on agriculture. The stories draw us backward, yet propel us into the future and provide us with a sense of place that cannot be denied.