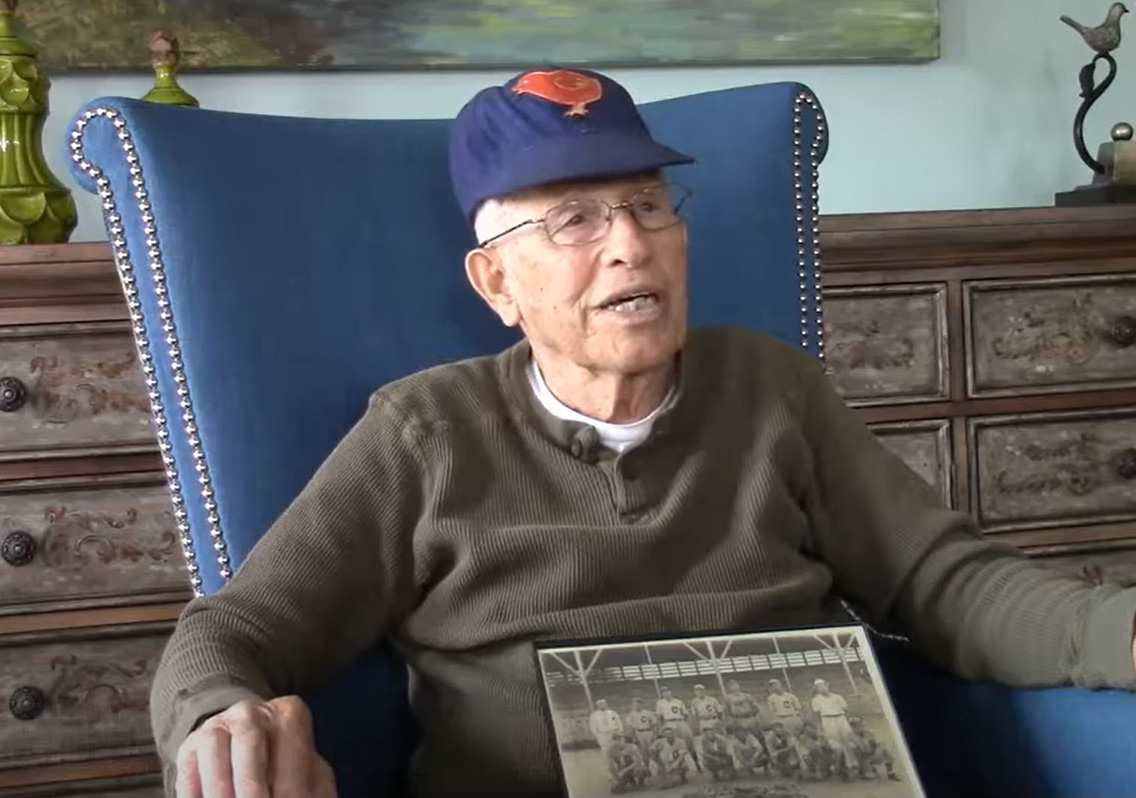 Speaker 1 (00:00): (Silence) The glory days of the Textile Mills Baseball occurred in the 1930s. During the Depression, baseball games provided a diversion from harsh living conditions.

McDavid Carr (00:47): Oh man, they turned out, they filled that stadium up every time I played.

Speaker 1 (00:54): Some of the equipment the teams played with was very different from what we used today.

Ellis Lark (00:58): They had Chiquola wrote across their chest. On the sleeve was a picture of a chick and it was probably made of cotton or maybe a wool mixture, a real hot, real hot uniform. The shoes had steel cleats on the bottom of them, our metals. And when they would slide, first of all, it could injure the player that was trying to tag you out. Another reason it could be dangerous to you is the cleat might hang on the base and make your foot turn the wrong way. Therefore causing an ankle or a leg injury. This is one of the replicas of the old chiquola chick baseball caps. The baseball gloves today are probably three times longer than what the glove was. Had no webbing it was just four fingers and a thumb.

Speaker 2 (01:57): The male owners recruited players and paid them well to play baseball.

Ellis Lark (02:02): He'd go out and hire good baseball players to them and just almost make a job for them.

Joe Atkin (02:09): For me it all started checking around finding players and they'd come there and want a job. Job was hard to get back in. They'd give this guys a different town and give them a job. Little old light job, messing around, toting water or little nothing to play ball on Wednesday.

Ellis Lark (02:30): If they got more money than the mill workers, back in the '40s, a skilled mill worker, they probably made right at $12 a week. And I've been told by Mr. David Carter, that some of these baseball players, when they came to town, they made $25 a week.They would go to Florida during spring training and some of the players that were not going to make it in the majors, the different mill companies went after them to come and play textile baseball for their mill.

McDavid Carr (03:05): All the mills hired several and give jobs in the mill. They had to work in the mill and play ball. Yeah, during the heyday when the ball players was hired and didn't work, they check in and go down there and lay down on bales on cotton and just pulled around till dinner time.

Speaker 1 (03:35): Several players went professional, but also the game had an impact on their lives.

Ellis Lark (03:41): Three or four of those players after they had played with the Chiquola Chicks, went on and played major league baseball teams like the Boston Red Socks and the Cincinnati Reds. Some of those teams they played for them.

Liz Patterson (03:57): Playing baseball I think helped him real realize that you had to work as a team. You had to support one another. He was always concerned about other folks. He was always especially concerned about people who worked in the mills because he knew how hard it was and how limited it was as far as going to school and doing things.

Speaker 1 (04:18): Phased out in the late 1950s Chiquola teens became more informal, organized play was no longer sponsored by the mill.

Joe Atkin (04:27): The war broke out and that's where it scattered them. And they didn't have the help. And they had to sell the Howard. Finally, they'd done away with the baseball.

Ellis Lark (04:37): It was a team playing the Mount Bethel community, the Kiwi community, areas real in close to Honey Fat, but the mill didn't sponsor that it was just a pickup teams.

Speaker 2 (04:50): After over 80 years, the once proud stadium where so many baseball battles were waged, was torn down and a new softball field was built in its place.

Joe Atkin (04:59): And a baseball they gave the ballpark to the town and they put lights around it to have a softball team.

Ellis Lark (05:09): It was quite a stadium in its day. However, when it beginning to deteriorate and the wood began to rot, the decision was made that instead of fixing it to tear it down.

McDavid Carr (05:21): He said it cost too much insurance. Scared somebody going be to hurt. It done been there a hundred years.

Ellis Lark (05:33): It was quite an accomplishment for a mill village to have a stadium like that. And it was kind of a sad day when they tore it down.

Speaker 1 (05:40): Where once the mill was a center of recreation, now the town sponsored recreation department provides sporting opportunities for boys and girls. These players may one day reach great heights on the athletic fields of the future. (silence)