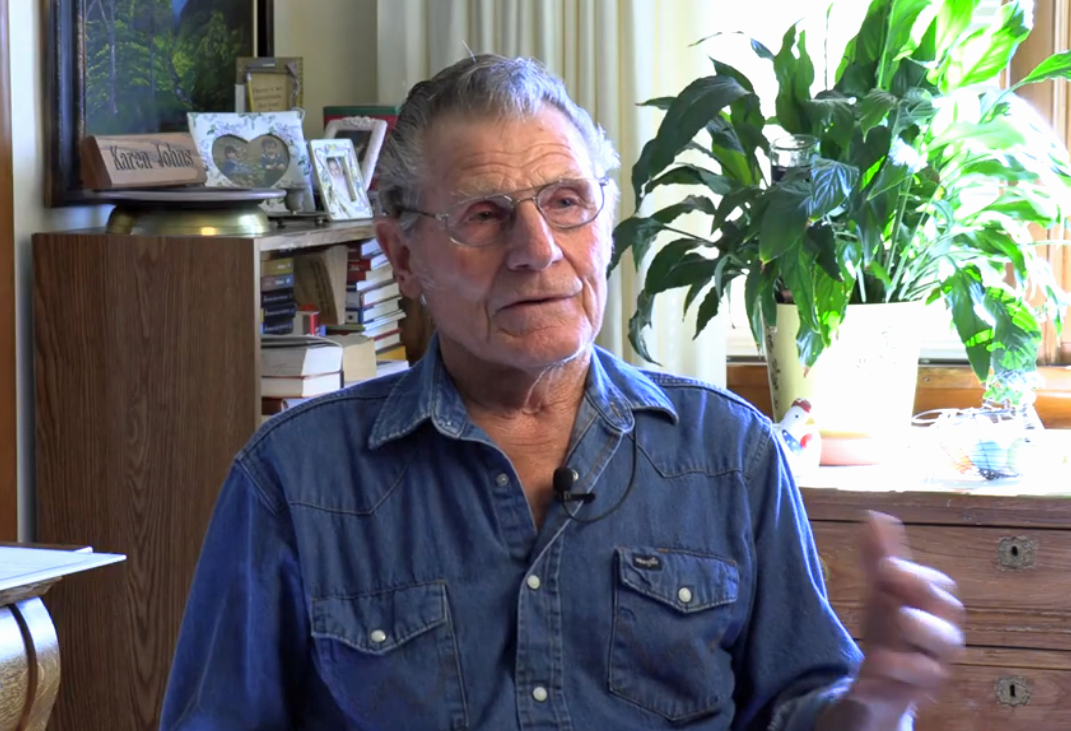 Johnson County Central High School’s FFA (Nebraska) and Striv students received a grant from Johnson County Nebraska Historical Society for local students to record stories and conduct oral histories in conjunction with the Museum on Main Street exhibition, Crossroads: A Change in Rural America. The exhibition was on view at the Historical Society from October 8 to November 12, 2021. In this interview, John James talks about his family's history on the farm and technological changes that have made farming more productive.

Houston Bailey (00:03): 30 miles west of Missouri River sits a little plot land that would soon grow to be a multi-generation farm. James John's the current owner of that farm.

James John (00:13): We've had at least four generations on John's side that have been farmers. At least three on the Hefner side, which is my mom's side. So basically, we've been farming ever since we got here, I guess, as far as that goes.

Houston Bailey (00:34): His grandpa came to America by himself and started a family. John's would eventually inherit that same land from his father.

James John (00:41): I didn't really start out to be a farmer, but that's kind of where I ended up. My dad was in failing health in the early 60s, and I was running around for a while. I went to college two years and worked around for another year or so. And then he was getting bad, and so I came back to the farm and just kind of took over the operation, I guess you'd say. When I started, I farmed just this 80 acres and I worked up at the Keim Farm Equipment in Syracuse. And I was raising hogs at that time too, and we had cattle. And so it was a busy time.

Houston Bailey (01:27): After his father passed, John's returned home to focus more on the family farm. Eventually, taking care of the land as a full-time job.

Houston Bailey (04:01): The market itself has evolved to help farmers and their pursuit of seed. With technology like DTN, Johns and the other farmers can monitor the market from home.

James John (04:09): When it first came out, it was relatively new and a little more simple than what it is nowadays. But I still look at that every day, several times.

Houston Bailey (04:21): Before DTN farmers had to go to their local elevators to check out prices and other farming information.

James John (04:28): There are so many options in the grain business nowadays that you can sell stuff for a couple years down the road or you can buy puts or calls. And so that would kind of guarantee you a low price, I mean, a certain price at various times of the year. And I never did get involved with that, I've always been a cash marketer. I to know what I'm getting before I gamble on trying to get more

Houston Bailey (05:06): Increasing prices and evolving economy have turned farming into a big business. Along with high dynamic market changes, the technology used in both seed and equipment has been dramatically upgraded. New technology has made farming less labor intensive and more efficient.

James John (05:23): You could do more in an hour probably than what the old timers could do in a month.

Houston Bailey (05:29): Current technology choose many feeds today that greatly increase the productivity of a farm.

James John (05:35): Oh, you have GPS and all kinds of, that's integrated into your tractor system and everything. I read the other day, there's on a John Deere sprayer bar, they have 36 cameras on there. And as you go through the field, it will detect where the weed is and it will spray at that moment instantly. And when it's past that weed, it shuts off. And it's just amazing what technology has done for farming, nowadays. I do have a combine that has some of that technology in it, but I don't take advantage of all of it.

Houston Bailey (06:23): Out dated practices were more physical and mechanical work. A farmer could easily fix a machine with the knowledge they possessed and a wrench in hand.

James John (06:30): The skills back then were mainly mechanical, I would say, because most of the equipment was mechanical. It wasn't too sophisticated or anything then. You would have a wrench and a screwdriver and you could fix just about anything then those days. Now, you don't need wrenches anymore, because it's too complicated to work on it. I mean, it's just so different than what it was in those days that you got to have a technology brain now to run that stuff because there's just so much involved in running equipment that pretty well runs itself you'd say, because they got a monitor and a screen in there that would do just about anything you want it to do. You can adjust your parts that's running in the ground. You can turn it. There's just hardly any limit now to what you can do in the field with the technology they have nowadays.

Houston Bailey (07:56): The change in farming methods greatly help transform agriculture into what it is today.

James John (08:01): I plant GMO seed. I started that in probably the mid 70s. In 1972, I bought a no-till planter. So I did no-till and all that. And of course, when you do that, then you have to have chemicals that will take out the weeds, and the bugs, and all that kind of stuff. And when I first started, we would use a dry, granular, not herbicide, but pesticide in an individual box on the planter, which you'd put in the furrow beside the seed. And that was supposed to take care of the rootworm and the cutworm and all that kind of stuff that would eat on your seed.

Houston Bailey (09:01): Advances in technology like the use of GMO seed and no-till, have become a staple across the country. Farming today is producing more output while improving efficiency every day.

James John (09:12): You put in long, long days in those days, because you just couldn't get that much done with a single row or two row piece of equipment. You had to make a bunch of trips over the field. And because there were no chemicals in those days that they could use for weeds and insects and stuff like that. Now, it's you go over the field once to plant it, you spray it a couple times and you pick it, or combine it.

Houston Bailey (09:45): In the early 1900s horses and other livestock were more common. A variety of different crops, such as alfalfa, clover, and milo were grown to feed the animals.

James John (09:54): These days, I mostly plant corn and soybeans because that's a cash crop and I don't have livestock anymore, so it all goes to town. I sold my cows about 10 years ago and got out of the hog business a while before that. So I have no need for the grain and it is a pretty good product to have to sell.

Houston Bailey (10:32): Agriculture has evolved over the years and changing prices in the markets of the farming economy are no different. The evolving machinery made it easier and faster to farm from livestock and no-till, to crops and GMO seeds. However, some things never change.

James John (10:48): You get to live out in the country. You can be your own boss. You can pretty well dictate your own path and what you do. And it's just a freer life than a regular job would be, as far as I'm concerned.