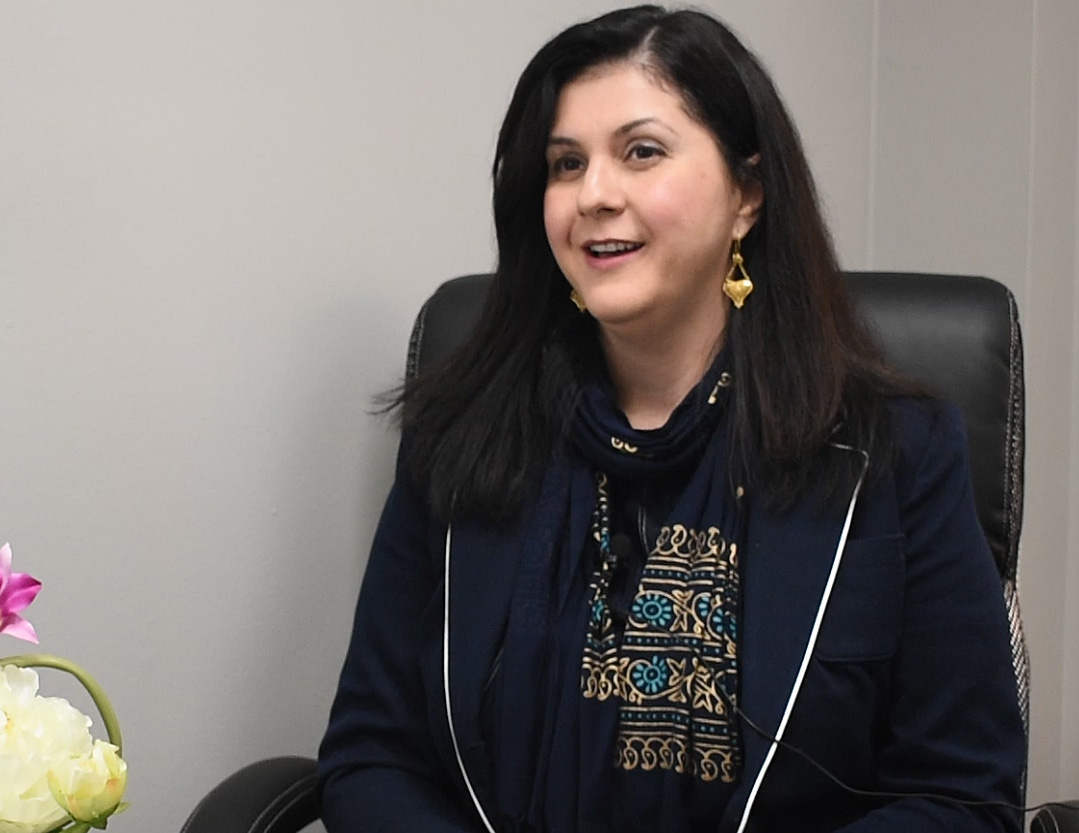 Cassia Oliveira (00:00): Hi, I'm Cass Oliveira. I am originally from Brazil. I came to U.S. in 2003 to pursue my doctorate at University of Arkansas in evolutionary biology. Um, that's where I met my husband in graduate school. He's originally from Iran, and, the plan was to go back to Brazil once I finished my PhD. But, we fell in love and I decided to stay. And, we have been together for 15 years. I am a biology professor at Lion College. It's a small liberal arts college in Batesville, Arkansas. We have a son, four year old son. He's an American. My husband is originally from Iran. So we have a very interesting, I guess dynamic in our family because we come from very different backgrounds in terms of culture and religion. But it has worked very well so far. So Batesville is a small town close to 11,000 people.

(01:03): And, it's a very vibrant community. I'm very proud and happy to live there. We, I think we have a lot of benefits of living in a small town in Arkansas, safety, um, just, just things that make you happy because you don't have to worry about long commutes. You don't have to worry about traffic. So I enjoy, I enjoy very much the community that, that we live in. I've been in this country for 16 years and it's so interesting that when I lived in Brazil, I was part of a majority and coming to us, I actually became a minority. Even though I'm not Hispanic, I'm Latino, and, and, and it's interesting how sometimes people will look at you because you have an accent, because you look different than maybe other people do. I was privileged to come to this country legally because I was actually invited to come for my education.

(02:08): But I can understand how maybe thousands, millions of people come here all looking for happiness, looking for a better life. So, my journey, again, I've been privileged that I don't have, I haven't had hardship in terms of my journey as an immigrant in this country. But, from the beginning I always felt welcome here. And, and Arkansas actually became my home from the beginning. And, I've had the opportunity to meet so many different people and to realize that despite some differences when you think about language and even religion and culture, that at the basic level we are all humans. And, and I've always been able to engage with people.

(03:00): And so for me, the transition, even though of course you have home, you know, you feel homesick and you have issues adjusting. Overall, my journey has been very, very easy, I would say. And I know that that's not the case for many people. I came with a visa to this country because I was a student and after a few years I became a permanent resident with a green card. And it was really after my son was born in 2015 that I decided that I want to have the full rights of a citizen be able to vote, be able to travel with passport. And that's when I applied for my citizenship. So I've been a U.S. citizen since 2016, but in reality, since the first day that I came to this country, I actually always function as a citizen because I had rights and responsibilities that I always fulfilled over, over the years. So in a sense, even though I have only been a citizen for three years, I feel that I fulfill my duties as a citizen for the full time that I've been in U.S.